People from the Christleton History Archives


During current research for our Christleton in WWII project I was reminded of an interview I conducted in 2008 with sisters Lucy Partington and Mary Jackson from the village, who served with lots of other village girls in the Women’s Land Army during WWII. This is their story.

In July 2008 the British Government eventually recognised, and finally gave awards to a very important group of ladies who helped win the last war. The citation on the certificate presented with their medal states,

“The Government wishes to express to you, its profound gratitude for your unsparing efforts as a loyal and devoted member of the Women’s Land Army/Women’s Timber Corps at a time when our country depended upon you for its survival”.

The Women’s Land Army was made up of girls from every walk of life. Posters of smiling girls bathing in glorious sunshine and open fields, covered the fact that they were raw recruits doing gruelling hard work and often with great monotony. Homesickness was common, and this was particularly true of the girls in private billets. Those in hostels were often more settled as they were in a group. However despite the difficulties there was a great sense of camaraderie amongst the girls who ultimately became life long friends. Although formed initially in 1917 at the end of the Great War, its greatest work was done from 1939, when after first asking for volunteers and later by conscription over 80,000 members were employed working the land by 1944. The ladies wore uniforms, although often did their own alterations and tailoring to improve them. The uniform consisted of; 2 short sleeved shirts, a green pullover, a pair of breeches, a great coat and a long thin Mackintosh for winter, a bib and brace overall, a hat, 2 pairs of socks, a pair of shoes and rubber boots.

They even had their own song
Back to the land, we must all lend a hand
To the farms and the fields we must go.
There’s a job to be done
Though we can’t fire a gun
We can still do our bit with a hoe
Back to the land, with its clay and its sand,
Its granite and gravel and grit,
You grow barley and wheat
And potatoes to eat
To make sure that the nation keeps fit.
We will tell you once more
You can help win the war If you come back with us –back to the land.

In 2008 I was delighted to be able to talk to Mary and Lucy about the award of their Land Army medals and about their lives during the war. They grew up with their parents and four siblings on an isolated farm on the south Cheshire /Shropshire border near Tushingham, and when the call came both volunteered to join the Women’s Land Army. Mary specialised in horticulture and spent some time at Bees Nurseries at Sealand in Chester, and was billeted at the Vernon Institute at Saughall. She then transferred to Market Gardens at Altrincham, on land that was soon to become part of Manchester Airport. Here she worked on all aspects of horticulture; planting, growing and harvesting flowers, potatoes, cabbages, sprouts etc, working in the greenhouses, and on the land. Every scrap of land was used and Mary became a dab hand at harrowing the ground with the horse and chain harrow. They were happy times and Mary went on to marry and have a very happy career in horticulture.

Lucy started her Land Army Career at Eccleston in Chester, and spoke about milking by hand at 5.45am in the morning, and later having to lift the heavy churns onto the collecting point at the farm.(She noted that the older men who were also working on the farm were always noticeably absent when the heavy churns had to be lifted!) Lucy was also able to work the heavy horse, ploughing and harvesting the crops, and she particularly remembers the difficult task of stooking the corn by hand. Both ladies said that despite the hardships these were some of the happiest times of their lives, because of the friendships made and the teamwork that existed. It was at Eccleston that Lucy first met Jim Partington, who was at his happiest working with his Uncle Tom on the family farm at Eccleston Ferry, and who it seems was also a great joker, causing Lucy some hilarious but unmentionable moments of embarrassment. On a Sunday in their spare time Jim often rowed Lucy on the river and they soon became an item. Later on during the war Lucy was able through the influential Misses Day & Wheeler of Rowton to obtain work at Johnny Williams’ Farm at White Lane in Christleton, and worked there for over six years.

Jim and Lucy married and eventually took over the Mosford Family Butcher’s Shop at Rock House in the Village, although Jim’s love was always in farming. They started with nothing at a very difficult time, with Mary Partington giving them their first weeks meat to sell, They worked hard and the shop became a huge success, a great village institution and a place loved by all villagers, not only for the meat, but for the comment, chatter, and above all a place to leave their keys for deliveries of any kind. Thanks to Mary and Lucy for sharing their memories with us. I’d be delighted to hear from any other parishioners who were involved in such work during the war, and to record their memories. 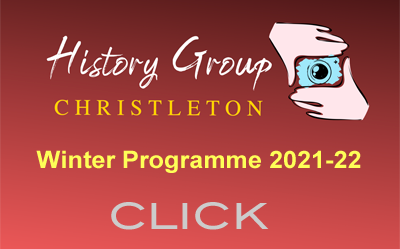