The Story of Christleton Pit - Part 1

To co-incide with the new publication of a booklet about Christleton Pit I am going to use the next month or so to explain the origins and restoration of this favourite village site. The booklet is dedicated to the memory of the late Ian Gorst who did so much to solve problems that occurred during our conservation work. The project had started as an exercise in research by children from Christleton Primary School in 1973 and which after the severe droughts of 1975 and 76 became a rescue project. The children’s initial work was entered in the “Daily Telegraph Save the Village Pond Campaign” and much to our delight won second prize in the competition, and an invitation to appear on the BBC TV Programme “Animal Magic”, live from the studios in Bristol. This appearance inspired the village community and a hundred trees donated to the school as a gift, were planted all over the village. Most of these still stand, now as mature trees, and enhancing our landscape. However the most severe period of drought of the last century caused the Pit to dry out completely, and it resembled a moon landscape. Shortly after this, groups of enthusiastic children and parents began the seemingly daunting task of reclaiming the pond as a feature of the village. The children had the support of the community, and particularly the Parish Council. This new booklet in colour tells the story in full, and can be obtained from David Cummings. All proceeds are going towards the Pit Project to aid further work of managing and enhancing this wonderful village amenity.

Earliest evidence of the Pit at Little Heath

The origins of the pit at Little Heath date back to at least 1710 when Gerard Townsend, a Merchant of Chester (Ironmonger) who had purchased the Old Hall, built "a pond for fish", enlarging a pond on land belonging to the then Lord of the Manor, Sir Henry Harpur of Calke Abbey in Derbyshire. Evidence for this comes from a case at Chester Assizes in 1772 when Robert Townsend, Gerard's son and heir, was prosecuted for not having paid tax to the Lord of the Manor of Christleton for the pond on his land over the subsequent years. Robert was at that time Recorder of Chester (senior solicitor) so it was a very high profile court case with opinion being sought from lawyers all over the country including Grey's Inn in London. The case involving "a pond for fish" at Little Heath was a very long drawn out affair, but it appears that Robert Townsend won the argument in court. The pond was on an area of land, even then described as "common land", land that the people of Christleton Parish had a right to use for grazing and watering their animals, a place to roam freely. There are stories in village folklore that suggest 'that horses of the Parliament' were watered there, and that it was the site of a medieval" ducking stool", but there is no actual evidence for either story. The first is a probability as Sir William Brereton's troops were stationed just a short distance away at the Old Hall and St James Church, but the ducking stool idea came from a suggestion by the Rev. A A Guest Williams, probably with tongue stuck firmly in his cheek.

What is certain is that the area around Little Heath was the source of a number of minerals suitable for extraction, and used in many ways in village life. The village of Christleton is built on top of beds of Old Red Sandstone, rock dating from about 300 million years ago, and there are several places in the village where this sandstone can be seen. The Old Surgery near the Village Store is built directly onto the stone, and there is an outcrop near the Law College which is very visible. This was part of the quarry that existed over much of the field between the canal and Christleton Hall. The quarry which was at its deepest adjacent to the bend of Quarry Lane provided a large amount of good workable sandstone, useful for both walls and building stone for houses, many of which are still standing today.

When the excavation of the A55 /M53 extension was taking place near the Rugby club the hard rock was found to be covered by sand to the depth of almost 50 metres. The centre of Christleton is in effect, built on an island of sandstone projecting above a "sea of clay and soft sand” which is very deep in many places. During the last great ice age, glaciers covered the area and brought with them thousands of tons of boulder clay and debris of volcanic rocks from the Lake District and North Wales. The Cheshire Plain itself was carved out by these glaciers and evidence of this can be seen from any high point overlooking the area. The mound where Beeston Castle stands and the ridges of harder conglomerate sandstone as at Peckforton, Burwardsley, Delamere, Frodsham, Helsby and, to a lesser extent Christleton, were not eroded and now stand proud of the land which the glaciers once occupied.

An interesting place to see both boulder clay and the granite type erratic boulders is along the beach and on the cliffs at Thurstaston Country Park on Wirral. However most farmland in and around Christleton contains some evidence of the deposits of both clay and these erratic rocks, and one such granite boulder has been left at the side of the Pit near Old Pit Farm, for people to see firm evidence of this. The boulder clay now lies in various depths across the parish, and is probably best seen in the area to the west of the village between the railway and the parish boundaries with Saighton and Rowton, and of course at "Little Heath Pit". Look out as you walk through village fields for evidence of marl pits that exist as evidence of where the clay was best for marling. Although we have lost many of these small pits in the last fifty years, we can still be described as the pond capital of Cheshire from the density of the ponds that still exist. In the early 1980's, before work was carried out by the Pit Group at Little Heath we were helped by a borehole survey carried out through the good auspices of Geoff Clifton from Consultant Engineers, Gifford & Partners. This showed that the depth of clay at the pit varies from a few centimetres to many metres. The ground typically appears to be 1m of fill (silt and clay) over a thin lens of sand, below which is 1m of clay, and below that 75cm of dry sand all lying on top of the sandstone bedrock. In another core hole we find that just over 3m down there is evidence of gravel which would have been ideal for road making by the local Highways Committee, which in the 1800's was the responsibility of the village itself.

There is written evidence from the minutes of the Chester -Tarvin Turnpike Trust that a "new" source of gravel for road making at Littleton came from the area of Hockenhull Platts. The Turnpike Trust had offered a prize of 100 guineas to anyone finding such a source of road making material. The road in question is the present Tarvin Road through Littleton, built along the line of an older Roman road from Delamere to Chester via Stamford Bridge in the 1780's, replacing the old medieval highway across the raised causeway and 'Roman Bridges' at Hockenhull Platts. 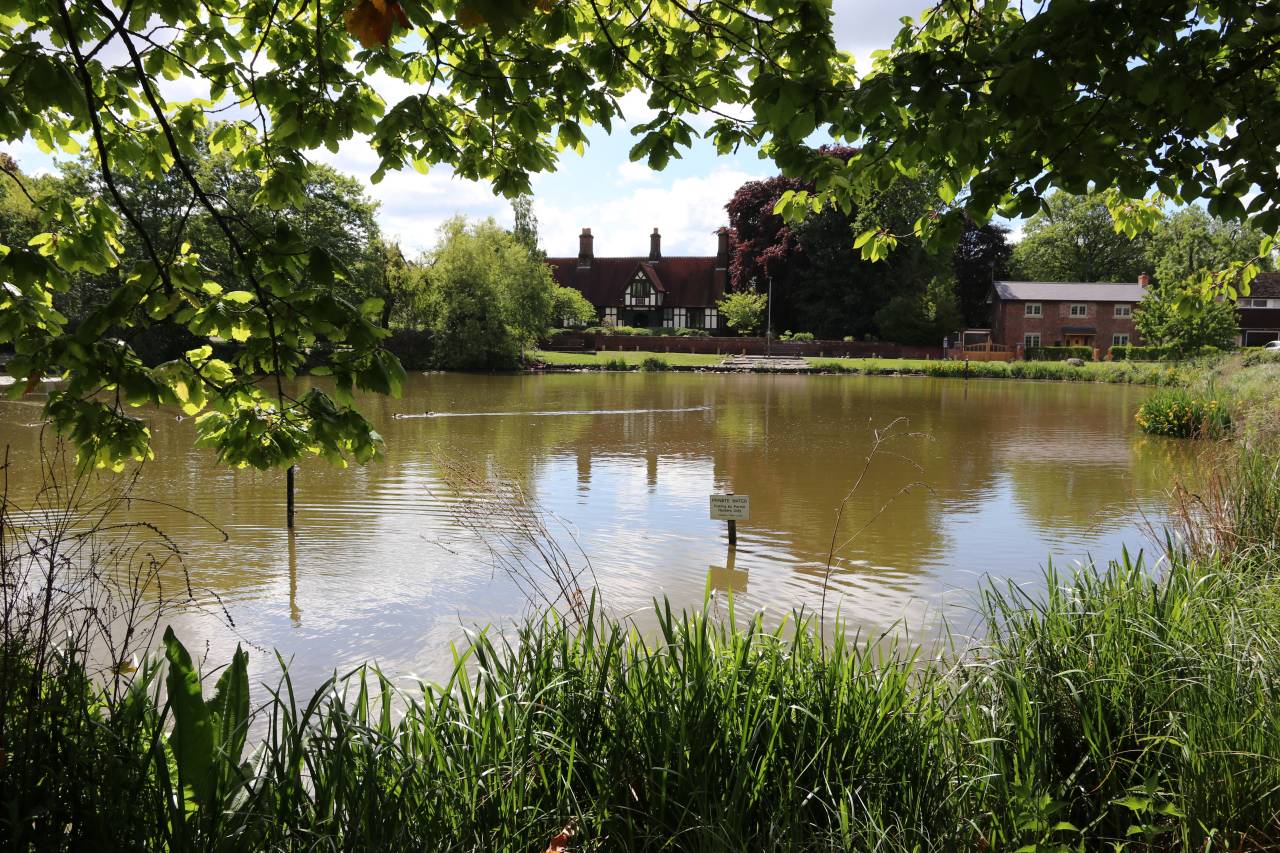 Christleton Pit as it is today