Whatever gave me the idea of starting what I hope will be a series of ramblings with a gardening theme I do not know. It could have been the visit to the Methodist Church Hall on Monday 10th September, 2018 to join the Christleton Gardening Club for the new season running from 2018 to July 2019. On payment of my subscription for the very reasonable amount of twelve pounds I received my orange coloured membership card numbered 9 which sets out the programme from now until next July. The meetings are held on the second Monday of each month starting at 7.30pm. Before introducing the speaker for the evening, Ann Harrison from Whitchurch, who spoke about shrubs for all year round colour, Judith Ferns mentioned that the Gardening Club would welcome new members. I had at that point visions of producing a Wanted Poster for the website a bit like those in the old cowboy films which don't seem to be so fashionable now. Instead of Clint going after a rough looking gunslinger I thought of a rather more gentle and relaxed individual. To date I have found that gardeners are usually very kind and can I say down to earth people.

If it was not the meeting that prompted me to start writing it might have been the kindness of Ann Wilkinson who had brought me some plants from her garden that evening. As she handed me the two sacks of plants she remarked that I might already have some of them in my garden in which case just dispose of them. I cannot say that I have every really thrown a plant away. Mind you that is not quite correct as I believe that another name for a weed is just a plant in the wrong place and I plead guilty to having thrown a lot of weeds away over the years. There was one plant in the collection that I already had but I was pleased to find garden space. The plant was Alchemilla Mollis, also known as Lady's Mantle. And that leads me nicely into my first rambling

Fresh Flowers in Her Hair Every Day

For a period of some 30 years I knew a lady who lived tucked away on a mountain near Prestatyn. She was a dealer in old books and used to call regularly with finds that she had made and which I was able to buy from her and offer in my shop at 25 Watergate Street, Chester. Her name was Dulcie Wilde-Rice, an intelligent, kind, effusive, engaging lady who always wore fresh flowers in her hair every day. One day she came after one of her visits to Eaton Hall where she had been undertaking a valuation or inventory of some antiquarian books in the Duke of Westminster's library. She must have charmed a gardener at Eaton Hall as she had quite a number of *Alchemilla Mollis* plants in the back of her car for me. Up until then I had never come across this attractive plant with yellow flowers. Having such a good local pedigree they were duly planted and have since prospered well and seeded themselves both to useful places and other locations that are rather tiresome. I have come to an age when trying to remember names can now be an embarrassment. And Latin plant names are no exception. Does that really matter when you can look at a plant and it brings back memories of someone or somewhere? So whenever I see *Alchemilla Mollis* I spare a sweet thought for the delightful Dulcie with a dahlia in her hair. 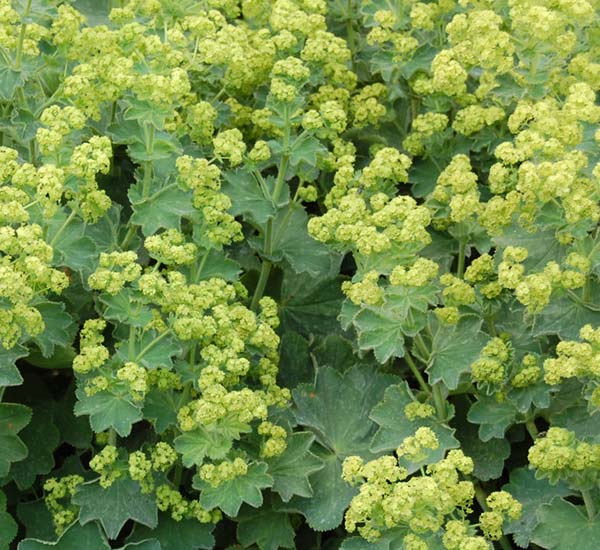 A Ramble Down the Garden